Americans will be celebrating Thanksgiving tomorrow, and I racked my brain thinking of a Top Ten list that would fit...there really aren't a lot of Thanksgiving toys out there. And then it smacked me upside the head - why not a Top Ten Toy Things I'm Thankful For?  Sounds great!

Please note - these are not the ten things I'm most thankful for.  I'd die a horrible death for my family, and my friends...well, they're not half bad either. This is a list of TOY things I'm thankful for, a minor subset of the far more important things in life. Don't go getting all first world problems on me over it.

10 - Ren and Stimpy, Mattel, 1993
While I love my Ren and Stimpy toys from Palisades, that's not what I'm talking about here. Around 1993, Mattel produced a short series of action figures based on what was a controversial but popular cartoon on Nick at the time. These figures stand out for me not because of their quality or even their subject matter, but because it was a turning point.  I had collected various toys during the 80's, but not seriously. In the early 90's that started to change, and as I became involved with the Usenet groups focused the hobby, it got more serious. With this series, two things happened: my wife bought them for me; and I kept them in the package.

The first is important because it signaled an acceptance and acknowledgement from the person I loved and cared for more than anyone else in the world. Yea, it's sappy, but it meant a lot to me in a way I can't really explain. Suffice to say, it was a major enough impact that it still matters 23 years later. By the way, if you were to ask my wife, I doubt she would be thankful at this point that she did this.

The second one is interesting as a turning point.  I no longer keep much of anything in the package, and I think that there is a general evolution for all toy collectors - open it all up, start keeping some packaged, keep it all packaged, start opening some up, and eventually you come full circle and just open it all up again. These Ren and Stimpy figures were the first time I kept something packaged, and while I've long since left that habit behind, the moment in time remains with me.

I stole the image from Now and Then Collectibles.

9 - Collector Friendly Packaging
Back in the 90's, I was part owner of a company called Flatt World Figures. Our first and only release was Bela Lugosi as Dracula, and the trials and tribulations of producing that figure and why the company failed could make their own book. Suffice to say, it was an interesting if expensive experience that did help my perspective when it came to reviewing toys.

I mention this because one of our innovations was Collector Friendly packaging. We weren't the first to look at ways to create a package that could be opened by the collector without damage, but we were the first that I know of to coin the term 'collector friendly' and use it in our marketing. Since then, it's become the norm with collector themed lines like Marvel Legends, Star Wars Black, and certainly any high end sixth scale product.

The reason I'm thankful for this is it gives the OCD collectors a break. You can buy a Hot Toys figure and actually enjoy it, and you can let go of some of the fear around value. At some point, most collectors stop caring, but much like a smoker trying to kick the habit, having packages like this can be their Nicorette Gum - it helps get you over the hump.

The photo comes from Cannibal Reviews.

8 - Usenet groups, mid 90's
If you ever want a collection to go from hobby to passion, just get involved with other collectors.  It's like pouring gasoline on a smoldering coal.  My first real exposure to other toy collectors was through Usenet groups like rec.toys.misc, and that's where I got my start reviewing and writing about my hobby. That grew into regular features there, which grew into my site in 2000. In fact, that's why the site is sub labeled "Michael's Review of the Week" - that was the name I used for any review I did on Usenet. It's also where I developed and defined my review style, using the individual categories rather than merely writing up all the good and bad in one long rant, a style that has since been replicated regularly in the collectibles review world.  Ah, those were the days...

As a child, my favorite toys were sixth scale action figures - G.I. Joe, Captain Action, Johnny West. It only makes sense that as an adult collector, this scale and style would speak to me. But during the 80's and most of the 90's, there wasn't much to collect in this size, at least not of any real quality.  Even worse, licensed products were pretty much non-existent.

And then Sideshow Toys came along. Producing sixth scale licensed figures like Universal Monsters and unlicensed figures like Bayonets and Barbwire, they took the market in a new direction. Adding in the Premium Format statues, various busts, and even prop replicas, they moved the concept of the collector market forward.  Even today, no other company has produced the breadth of figures, dioramas, and vehicles in this scale. They also created what was the best affiliate program on the market, allowing a site like mine to break even.

Sadly, little of this is still true. But Sideshow started a market that has since flourished, and sucked up a tremendous amount of my hard earned money.

When I first started going, it was a great chance for my nephew (who lives in CA) and I to spend some quality time together.  We've made plenty of wonderful memories at the con, and I'm grateful for them.

Last year, my youngest children went with me, a tradition I hope we can continue for a few more years.  Again, we made some fun memories, things that will stick with them through life and will always remind them of their dad.  What more could you ask for?

The photo below is my son, hanging at the South Park off site last summer, getting ready to eat some of Cartman's chili... 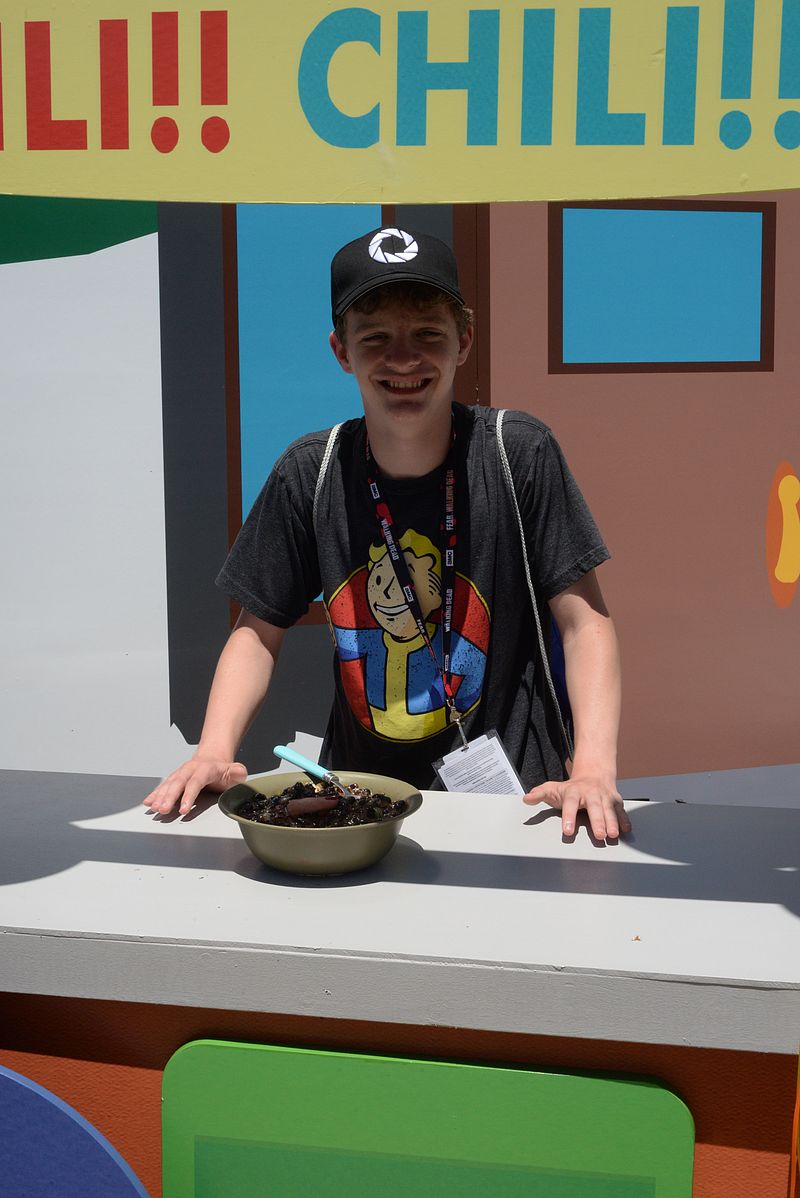 5 - Other Collectors
I already mentioned good old Usenet, but the key is other collectors.  Over the years I've met far more great people in this hobby than bad. Back in the 90's, I was part of a local collecting club called A.T.O.M. (Action Toy Organization of Michigan), and getting together once a month and just talking about the hobby was great fun.  These days platforms like Facebook take up some of the slack, and provide a way to get to know other people with the same particular weirdness, no matter where they live in the world. I can't emphasize enough what a critical part these relationships have been to my overall experience as a collector. To all my toy buddies, thanks!

4 - Hot Toys
I said I'd mention three companies - here's the second.  It all gets back to my love of sixth scale product.  While others have produced a variety of high end figures in this scale, none have done it with the consistency of Hot Toys.  They've also lead and innovated, with advancements in production paint, detailed sculpting, rooted hair, articulation, sound and light features - the list goes on and on. Sideshow doesn't take as much of my money these days, but Hot Toys was more than happy to pick up the slack.

3 - McFarlane Toys
And here's our third and final company to make the list. Companies recognized that there was a collector market out there, but few did anything specific about it. Others scoffed at it, feeling it simply was too small to make any specific attempt to accommodate. But McFarlane knew that it existed, and knew that if he raised the bar on the quality of action figures, he could tap into that market in a way no one had before.

His success led to a completely new market, something part toy, part collectible, that can be found at retailers as diverse as Hot Topic and Toys R Us. His embracing of the collector buyer led other companies to do the same and go further, and it's improved the quality of figures for all action figure consumers, kids and adults alike.

2 - All the toys themselves
Maybe it's a cheat, but it's impossible for me to pick out one line, or one figure, or one license to put on this list simply because it exists.  For me, it's about all the figures over the years which have kept me connected to a youthful perspective on life.  There's nothing quite like the feeling of 'wow' that a truly remarkable toy or collectible can bring when you first open it up. The very best releases today remember that they are toys first, collectibles second, and can create a feeling of nostalgic wonder mixed with modern marvel. The photo below is merely the most recent that made me feel that way - there have been hundreds over the last 20 years. And for that, I'm thankful.

1 - My Readers
People ask me how it's possible to do three reviews a week, almost every week, with such dedication over 16 years.  That's easy - my readers.  I enjoy doing the reviews for lots of reasons, not the least of which is the fun I get out of another hobby that intersects, photography. But what keeps me dedicated and coming back is my readers, to whom I am tremendously grateful.  For all their input both good and bad, for their support, and for their love of this hobby we share - that's my number 1 toy thing for which I'm thankful.

If you're enjoying this concept of Captain Toy Picks, drop me a line and let me know!

Photos and text by Michael Crawford.